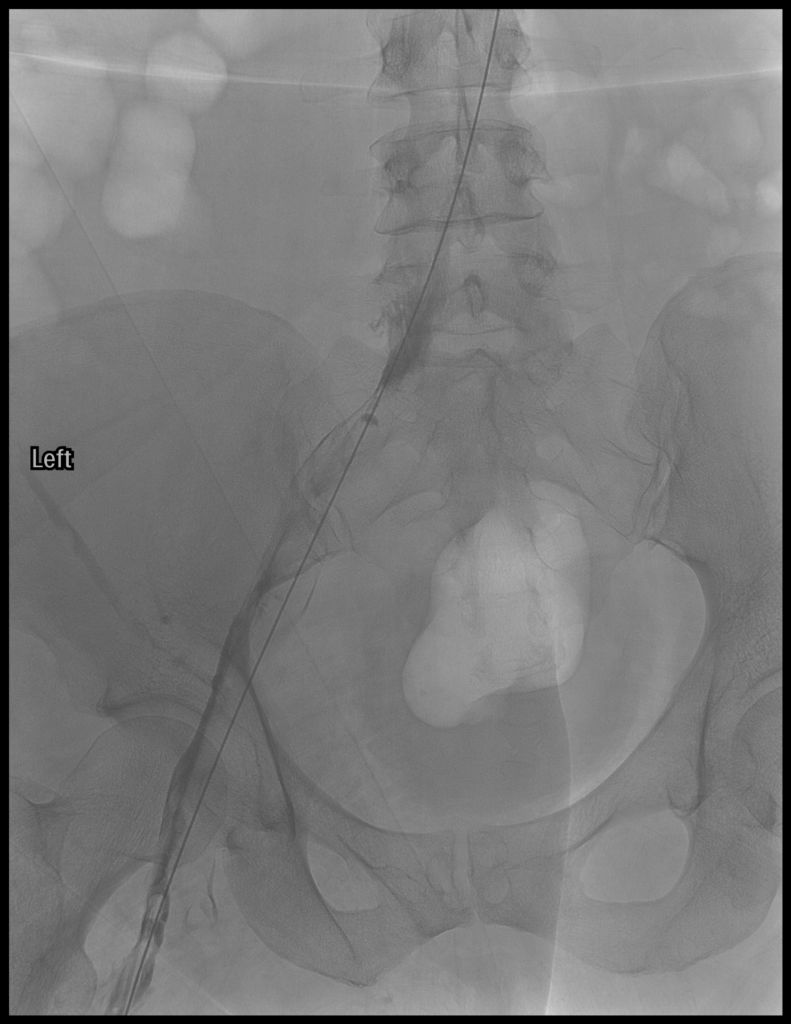 iliac veinl clot from May Thurner 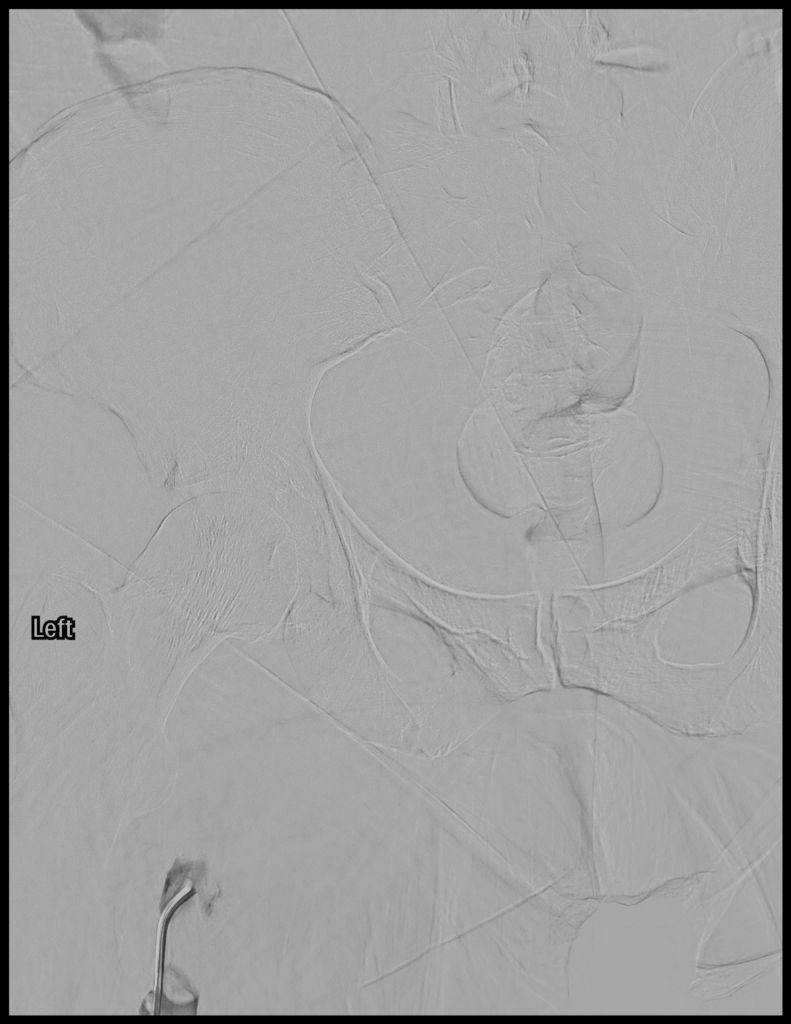 Common femoral clot from May Thurner 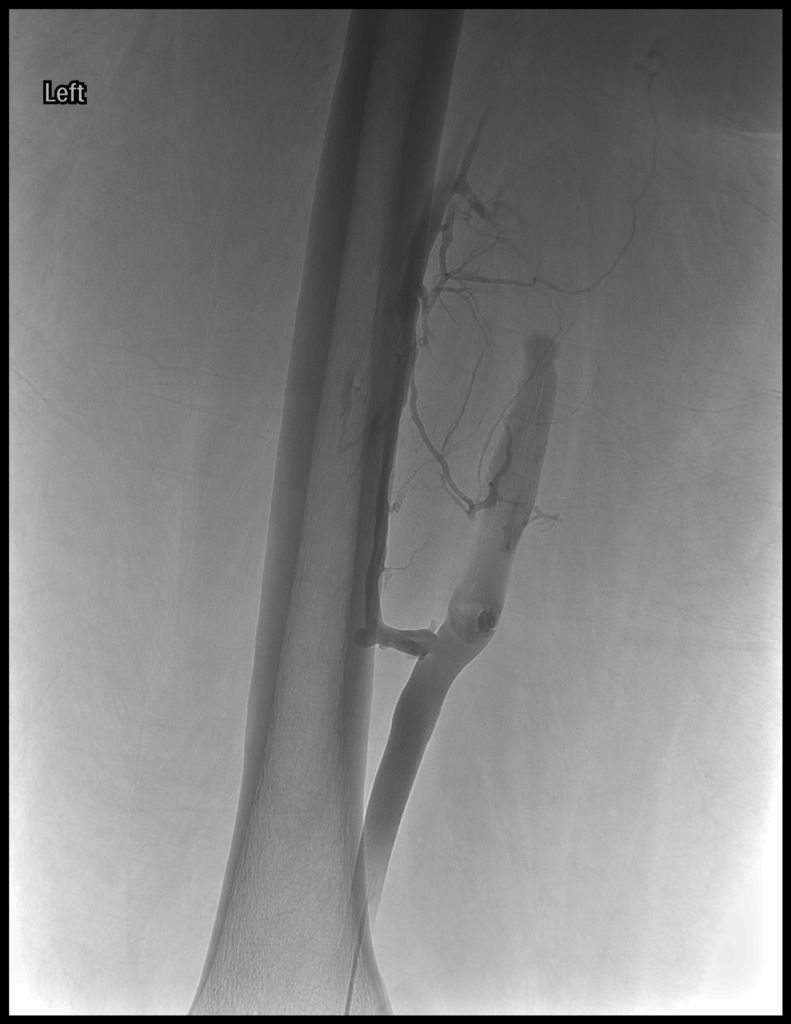 SFV clot from May Thurner 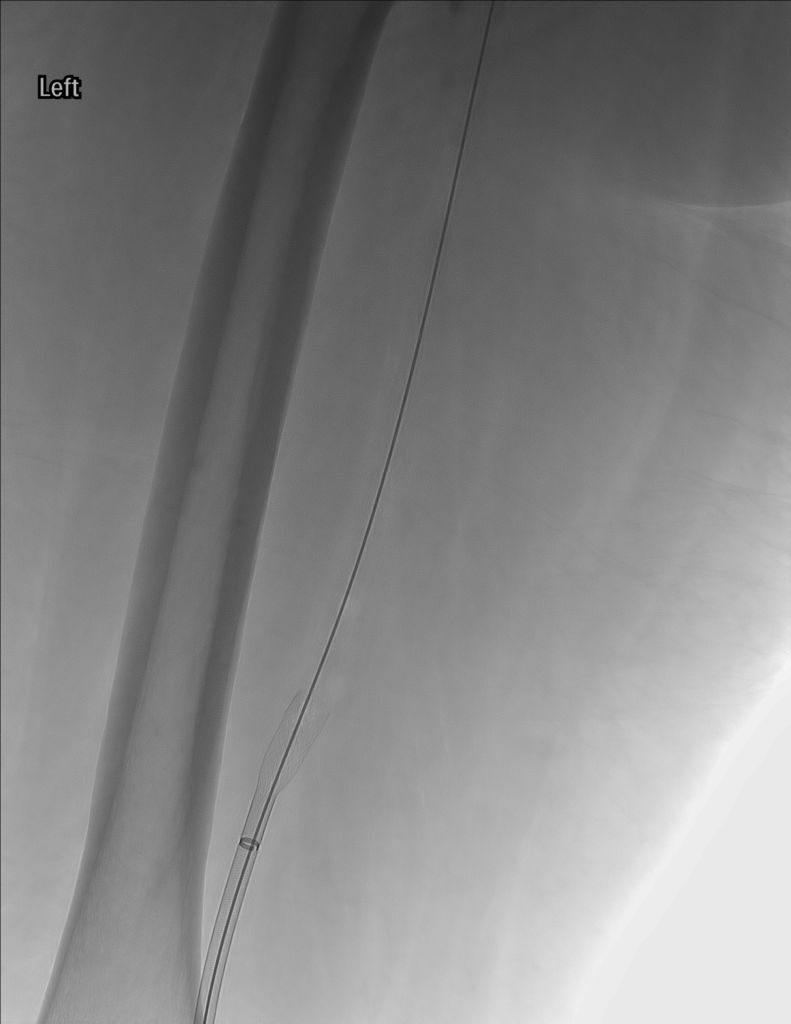 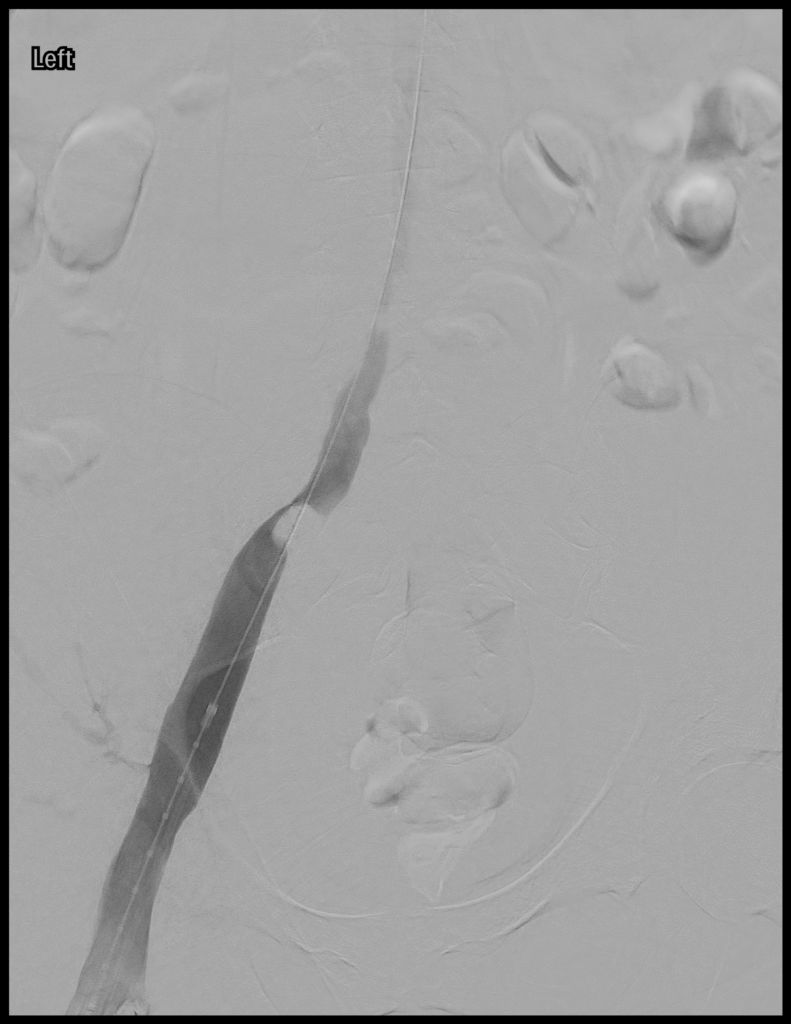 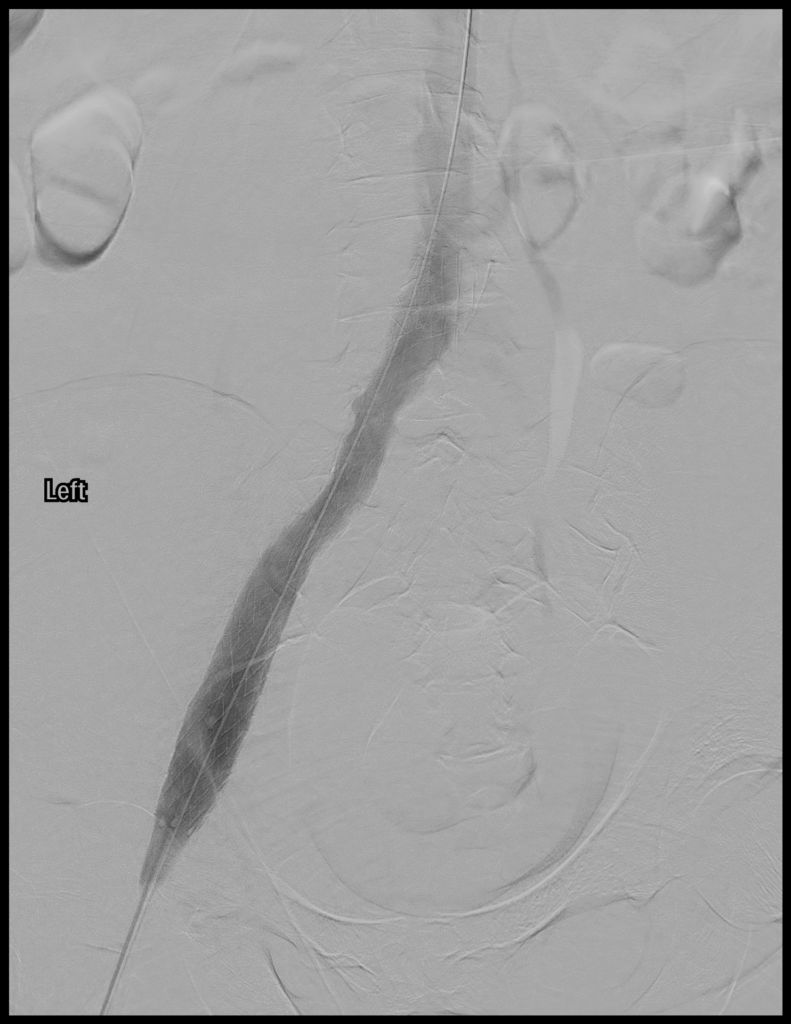 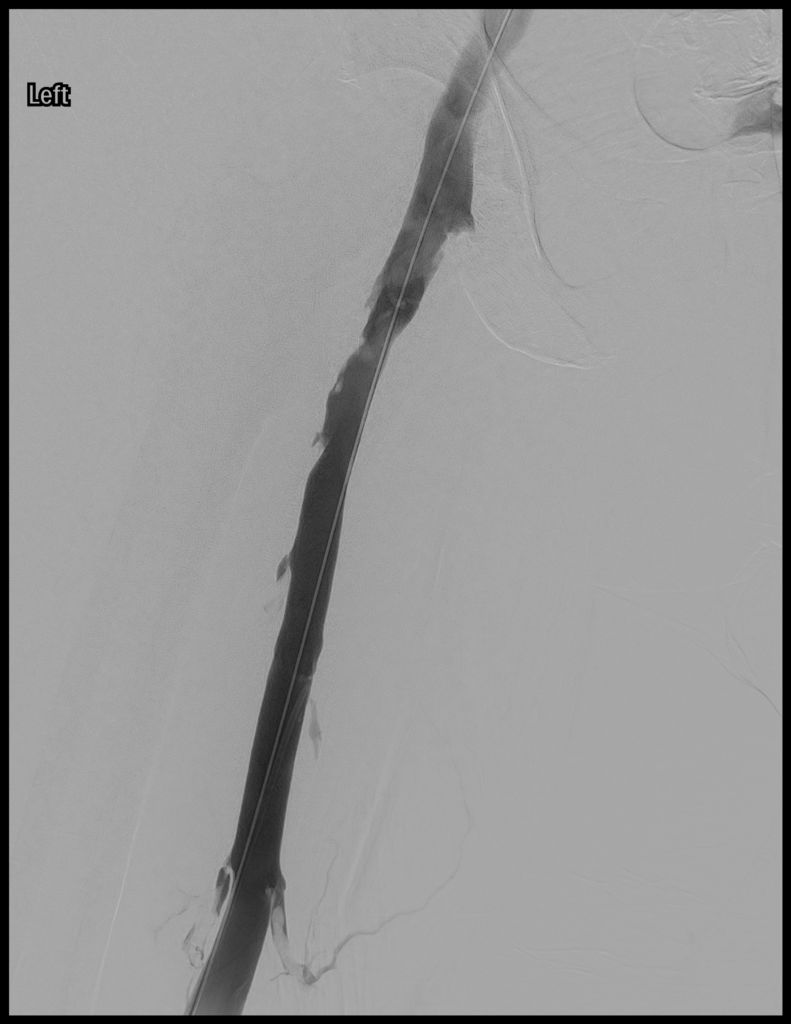 after Inari Clottreiver to SFV Clot

Informed consent was obtained from the patient after explanation of risks and benefits. Patient was placed prone on the interventional table and the __ leg was widely prepped and draped in the usual sterile fashion in the popliteal region. Conscious sedation was administered using standard protocol for monitoring by a dedicated nurse monitoring the patient. A total of IV 300 mcg of fentanyl, 1 mg of Dilaudid, 2 mg of Versed were given throughout the entire procedure. Total of 10,000 units of heparin was given throughout the
entire procedure divided into doses of 5000 units during thrombectomy.

Under sterile sonographic guidance, a micropuncture needle was used access the __ patent popliteal vein on the first attempt. Eventually this access was upsized to accommodate a 16 French sheath into the popliteal vein and into the mid superficial femoral vein. A venogram of the left leg and pelvic vein and inferior vena cava was performed with a 5 French multiside port straight catheter. This delineated complete occlusion of the entire superficial femoral, common femoral, and entire iliac veins. The inferior vena cava is patent throughout its course. There was no difficulty in traversing a Glidewire through this clot burden and a inferior vena cava venogram was performed delineating wide patency without inferior vena cava clots.

Using the INARI CLOTRIEVER thrombectomy device, a total of 6 swipes was performed following the manufacture protocol and the device clinical specialist was present throughout the procedure.

Large amount of clot burden was completely removed. This was followed by balloon angioplasty of the common femoral, iliac veins using a 14 mm balloon. At this time, an intravascular ultrasound device was placed into the inferior vena cava and iliac veins and appropriate measurements were obtained. A propertly sized 16 mm x 15 cm long ABRE self-expanding stent was deployed using intravenous ultrasound guidance. This stent was dilated using a 16 mm balloon. Completion venogram shows wide patency of the entire femoral, iliac veins with no residual clots or stenosis.

The sheath in the popliteal vein was closed using a figure of 8 stitch and there was no hematoma.

No immediate procedural or sedation complications occurred during the procedure.

Wide patency was achieved with no residual stenosis or clot burden. Patient suffered no immediate procedural or sedation complications.