What is pelvic congestion syndrome?

Pelvic congestion syndrome or pelvic venous congestion syndrome is a chronic condition with Chronic pelvic pain as the most common presenting symptom.  The chronic pelvic pain is thought to arise from dilated and refluxing incompetent pelvic veins (pelvic varicose veins). The diagnosis is based on the patient-reported symptoms, clinical examination, anatomic features (Enlarged gonadal veins and pelvic varices on CT and ultrasound), and venographic findings.  Many patients report improvement in their symptoms after embolization of the refluxing pelvic veins (often with a combination of sclerosant and coils).

The syndrome often causes persistent dull pain in the pelvic region, which is said to worsen at different times and in different situations. It is difficult to establish the true incidence of pelvic congestion syndrome given the lack of definitive diagnostic criteria. It primarily affects women who have been pregnant several times and who are in the reproductive age group. The diagnosis is not made in menopausal women. It is estimated that up to 30 percent of patients presenting with chronic pelvic pain in whom no other obvious pathology can be found have pelvic congestion syndrome.

Pelvic congestion syndrome is generally characterized by pelvic pain of at least six months. It is often first manifested during or after a pregnancy, and becomes worse after subsequent pregnancies as the ovarian/gonadal veins dilate/enlarge to accommodate increased pelvic vascular flow related to pregnancy. The pain varies in severity, but is usually described as a dull ache or heaviness that increases premenstrually.  The pain is often described as worsening with prolonged standing, walking, or activities that increase intraabdominal pressure; and after intercourse. It is usually one sided/unilateral, but can be bilateral or shift from one side to the other. The pain can also become acutely worse during certain activities.  Examination focuses on assessing for pelvic varices gluteal, vulvar, and/or thigh varices.

In addition to pain, women may experience other symptoms of pelvic congestion, as well as various combinations of these symptoms. Severity can also vary quite a bit between people. These symptoms may include: 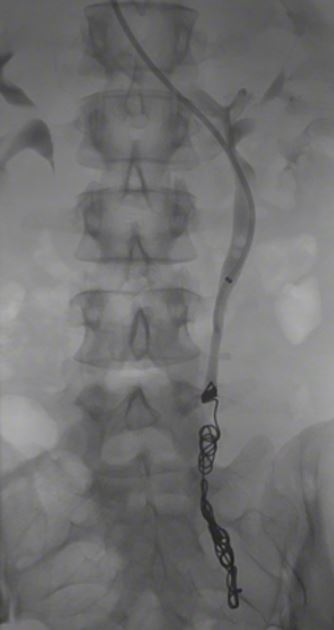 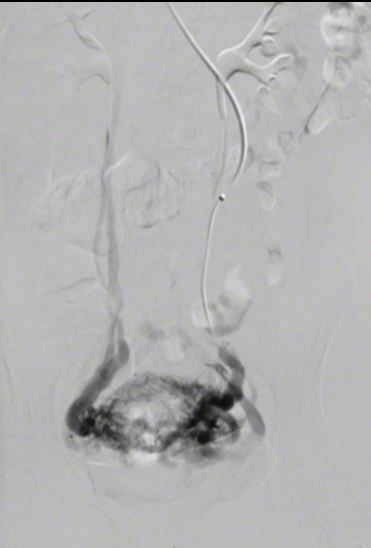 It is currently believed that pregnancy is the most common cause of pelvic congestion.  The higher prevalence of syndrome in multiparous women/women with multiple pregnancies may be related to the approximately 50%increase in pelvic vein size which occurs during pregnancy, which may lead to venous incompetence and reflux in the nonpregnant state.  There are many additional reasons why pregnancy is thought to be associated with this condition:

Consequently, women who have had a previous pregnancy are more likely to develop pelvic congestion, and the risk is thought to increase with the number of pregnancies a woman has.

How is pelvic congestion syndrome diagnosed?

Pelvic congestion syndrome can be quite difficult to diagnose, and doctors often have to perform multiple diagnostic procedures to address other possible causes of your symptoms. These procedures may include:

Ultrasound followed by CT is often preferred as the first step in diagnosing pelvic congestion because it can detect varicose veins and evaluate blood flow.

In the absence of a pathology that can cause intense pain, the patient needs a consultation of several doctors: a gynecologist , urologist , neurologist , gastroenterologist , orthopedist , oncologist, psychologist , psychiatrist.

Pelvic congestion syndrome treatment usually focuses on reducing and relieving symptoms. Unfortunately, there is no definitive cure for this condition, and it can be difficult to completely cure.

Available medicines to relieve your symptoms may include:

Currently, the most successful treatment is a minimally invasive surgical procedure called pelvic vein embolization/gonadal or ovarian vein embolization. This procedure blocks some of the varicose veins that are believed to be the source of pain.

Many studies have shown significant improvement in symptoms in women undergoing gonadal vein embolization. As with any procedure, there are risks and not all women are suitable for this treatment option.

Symptoms of pelvic congestion syndrome often get worse late in pregnancy as the baby grows. Additional pressure is placed on varicose veins in the pelvis, often resulting in increased pain caused by the condition.

Organic causes of the pain:

Disease without an organic cause does occur in less than 2% of cases. This can occur in fibromyalgia, hypochondria, neurasthenia, depression.

Does pelvic congestion syndrome cause bloating

Although bloating is not one of the most common symptoms some patients do appear to have bloating as a primary concern in pelvic congestion syndrome.  Care has to be taken to rule out other more common causes of bloating especially when associated with mensuration including fibroids and endometriosis.

Because pelvic congestion can be  associated with leg/buttock varices leg pain and hip pain can be common complaints.  Generally we recommend leg elevation and compression in these instances.

Pelvic congestion syndrome is not generally considered as a cause of weight gain.  Despite enlargement of the incompetent pelvic veins the weight gain as a result of retained blood in these veins is minimal and would likely not be significant.

Can you die from pelvic congestion syndrome?

Additionally symptoms such as chronic pain, pain during intercourse, and dysmenorrhea can lead to decreased physical activity, loss of function, and depression.

There are treatments available to minimize your symptoms and help manage the condition. Talk to your doctor about your options.

It’s also important to talk to your doctor about counseling, if necessary, to help you manage the significant chronic pain that may accompany pelvic congestion.

Women who have vulvar varices are often asymptomatic. In those patients who have symptoms and pelvic venous congestion syndrome they may describe vulvar discomfort, swelling, and pressure that are exacerbated by prolonged standing, exercise, and coitus/sex.  Exercise is generally to be modified to limit standing and pooling of blood in the pelvic veins

Ultrasonography is the first line imaging study for the diagnosis of pelvic congestion syndrome.  It is used, in part, to exclude pelvic neoplasms and uterine pathology as potential causes of pain. Dilated pelvic veins in the adnexal regions or in the outer one-third of the myometrium are common findings on pelvic ultrasound. If pelvic congestion is considered from the ultrasound the ovarian veins should be evaluated by CT.  In one small study patients with presumed pelvic congestion syndrome were found to have statistically significantly enlarged ovarian/gonadal veins that measured 7.9mm versus 4.9mm in the control group (Reference).

There are no good randomized controlled trials assessing endovascular gonadal/ovarian vein embolization versus  laparoscopic or open ligation of the ovarian veins, and hysterectomy with bilateral salpingo-oophorectomy (removal of both ovaries) for women who have completed childbearing.  However especially in patients where there are other possibilities of causes for pelvic pain such as uterine fibroids or endometriosis a hysterectomy and bilateral ovarian removal (Salpingo-oophorectomy) can be performed with success.

Interventions such as gonadal vein embolization performed by an interventional radiologist are the minimally invasive treatment of choice for pelvic congestion.  For patients not interested in interventions supportive therapies have been suggested including vulvar support and compression (pelvic supporter), leg elevation, compression with support hose, sleeping on the left side, exercise, and avoidance of long periods of standing or sitting