What is a portacath or Chemo port?

Port-a-cath also referred to simply as a Portacath and chemo port (A chest port used for chemo) is an implantable venous access system.  Portacaths (Chemo ports) are one of a set of long term venous access options.  The intravascular segment is made of similar material to Hickman catheters and other similar tunneled catheters.  The port itself has a thick injection membrane which is housed in a titanium or plastic case, which is surgically implanted under the skin.

The chemo port is then accessed with special non coring huber type needles through the skin.  These ports allow patients to swim and bathe which is restricted with other tunneled central venous catheters such as broviac or hickman catheters.  Implantable port-a-caths (Chemo ports) allow for central venous access that can be used by patients who need long-term venous access for various treatments or for administering fluids and medicines. Common locations for placement of  portacaths/chemo ports include either the chest or on the arm.

The Port-a-cath (Chemo port) is recommended in several situations;

Alternatives to a portacath (Chemo port)

There are several central venous catheters that can be used for long term venous access or continuous infusions or blood draws.  These include PICC lines and broviac catheters.  There are some notable differences between these types of venous access devices.  PICC lines for example are placed peripherally ie.  Through a vein in the arm.  PICC lines can be placed at bedside without sedation with just a small amount of local numbing medication.  These a veins have a higher tendency to occlude or thrombose than implantable ports placed in the chest which enter larger veins such as the jugular vein.  However implantable portacaths (Chemo ports) placed in the arm generally enter the same veins that a PICC.  Additionally ports whether in the arm or chest are entirely placed under the skin and therefore have a lower infection risk and an ability to remain in place for longer (sometimes years)  then PICC lines.  Ports however do require a surgical or interventional suit to place them as an incision on the skin making sterility a greater concern.  Other alternatives such as broviac catheters also known as small bore tunneled central venous catheters have similar access into the larger veins of the neck but do have external portions which makes them visible and more prone to infection compared with implantable ports.

Types of Portacaths and Chemo ports 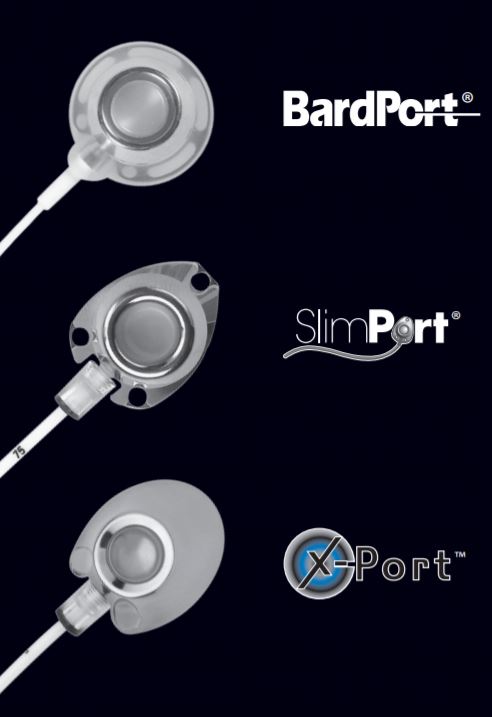 Chemo ports can be used for many indications some of which are not necessarily for chemotherapy administration.  Depending on the indication for placement ports with two lumens can be placed.  these two lumen ports are generally larger requiring a larger pocket be made under the skin but allow for two medication injection or medication injection and withdrawal simultaneously.  We don’t generally advocate for dual lumen ports unless absolutely necessary as the second lumen results in ports that are more visible cosmetically requiring a larger incision and result in a larger luminal narrowing of the vein they traverse which is a risk factor for venous occlusion.  Additionally for ports placed in the arm we do not ever place any ports that are not low profile or that have more than 1 lumen.

ports can come in low profile which makes them less visible through the skin.  These low profile ports are not for everyone however given the increased difficulty with identifying the port and its diaphragm especially when there is a significant overlying chest tissue.

Bard is a major manufacturer of chemo ports.  If you are interested in learning more and seeing their chemo port offerings click here.

How to sleep with a chemo port?

Sleeping positions differ with port site placement.  For chest ports which are by far the most common location for port placement sleeping on your back is recommended in order to avoid pressure on the port and risk of flipping the port within the port pocket.  Some patients are able to sleep on their side (sleep on the opposite side of the port) without issue.  for example for a port placed on the right chest it would be acceptable to sleep on your back or on your left side.  Specially made side sleep pillows can help in this setting. For chemo ports placed on the arm the only sleeping position that would not put pressure on the port is sleeping on your back.

What are the parts of a portacath (Chemo port)?

A port-a-cath (Chemo port) is made up of three parts, the port itself, venous catheter and a catheter connector. Let us discuss one by one the role of each of these parts.

Port- is the reservoir compartment or a small chamber that is sealed at the top with a septum. The site of the port which is punctured is made of resilient silicone. The septum can be punctured many times with a non coring Huber type needle many times. Every time the chemo port is accessed the fluid that is in the port is discarded.  This fluid is generally heparin but can also be alcohol in patients who are allergic to heparin or even saline.  The heparin lock is meant to keep the catheter free of clots.  Once accessed with the needle through the skin the fluid can be administered or blood drawn.  Chemo ports are located under the skin either by visual inspection or by palpation (Feeling for slightly raised rubber markers around the septum). Chemo ports come in multiple different styles and can be low profile to allow for discreteness or placement in the arm and they can also have 1 or 2 lumens or septum to allow for administration of 1 or two medications simultaneously

Catheter– is a flexible tube/catheter generally made of silicone and  similar to that used in most other tunneled central venous catheters which commonly runs from the port portion under the skin in the chest and is tunneled to the  venotomy (Site where the vein is entered) at the base of the neck into the jugular vein or subclavian vein. After entering the vein the catheter tip generally terminates in superior vena cava/right atrium to allow for mixture of the injected drugs into the high blood flow region near the heart.

Connector– is basically a catheter connector that connects catheter to the port. This could be made of titanium, titanium and plastic or entirely plastic.

The placement of port-a-cath / Chemo port involves a minor surgical procedure, which allows for placement of the port and catheter completely inside the body with the access port placed under skin where it can be felt to allow for easy puncture/access through the skin.

The procedure is performed under local anesthetic such as lidocaine using imaging guidance (X-ray and ultrasound).  A skin incision spanning about 3cm is made on the chest wall for the port and another smaller incision is made on the neck. The neck incision is very small 1/2cm or less which allows access to the vein usually the jugular vein or subclavian vrin and generally does not require to be sutured.  Some centers will use sutures but these sutures are generally the absorbable type.  At LA Vascular this venotomy (neck incision to allow access to the vein) is closed with dermabond and steristrips allowing for decreased scar formation and avoiding keloid in those who are prone.

Likewise, removal of this implantable venous catheter requires a small incision so that it can be removed gently from neck and chest. This might require local anesthesia.

This type of implantable venous access catheter requires minimal care as compared to other catheters, since it is completely positioned under the skin. However, there are still a few guidelines that should be followed when it comes to port-a-cath/chemo port.

Cleaning the site-  A dressing covers the needle (if placed) and the portal site so that both are secured in their place. It is very important to keep the dressing dry and clean as a port site infection usually requires removal of the port. We recommend daily checks of the chest port site to assess for any redness, swelling, bruising or tenderness which may indicate an infection. If any of these signs are present, contact your clinician immediately.

Flushing- Chemo ports are generally primed with heparin to limit clot propagation.  alternative exist for patients who have allergies to heparin and they include alcohol or simple saline. Heparin is used in the vast number of cases given its benefits of avoiding clotting.  Every time the port is accessed the heparin lock is removed from each lumen (Two lumens for a double port and 1 lumen for a single port).  Once this heparin lock is aspirated and discarded the port can be flushed with saline and medication can be administered.

Restricting Activities- While it’s understood that vigorous activities should be undertaken with caution, it is best to consult your doctor before undertaking any routine as some providers have separate recommendations. Generally however activities like swimming which are not allowed with most tunneled hemodialysis catheters can be undertaken once the port has been in place and the incisions have healed.  Despite this contact your provider with questions as some patients who form wounds over the puncture site can be at greater risk for infection from simple activities such as swimming or showering .

Make sure you are familiar with the basic care techniques of port-a-cath/chemo port and discuss any questions with your provider. In addition to the above the following guidelines are universal for ports;

Much like other devices that are implanted, port-a-cath/Chemo ports have potential complications.  The complications can occur during placement, after placement or during removal the port have been reported in the literature.